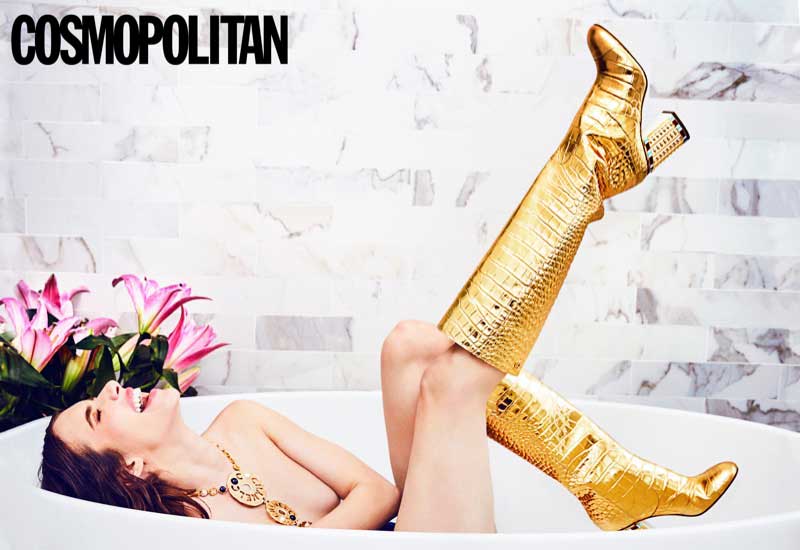 Actress, Emma Roberts, gets the cover of the newest issue of Cosmopolitan as she promotes her new Netflix rom-com, Holidate. In this interview we get a little bit more of an intimate look into the actress life as touches on subjects such as how her vision board relaxes her, her recent split, reading and much more

The poem on the Vision Board

When the end comes
We realize
Everything we’ve heard
About it
Is true.
Betrayal does feel
Like being shot.
Parting abruptly
Or for weird reasons
Does cause the heart to ache.

“I never want to talk about relationships I’m in or that are ending or have ended. It’s hard enough to be with someone by yourself, let alone with an audience…growing up is hard. Sometimes it makes me sad that I can’t have a private moment. Because of Twitter and Instagram, there’s a whole other element where everybody can comment on what you’re doing, and no one knows the real story. That’s hard.”

“I think that no matter who you are or what you do or wherever in the world you are, anything ending is hard. Losing something is hard. And the only thing I can say for that is… What can I say for that? I’m realizing that life is highs and lows. I’m trying to ride them out and live somewhere in the middle. When you’re low, you think it’s never going to end. When you’re high, you’re so scared of it ending. And I’ve lived in both of those places for too long.”

Being Independent with Me Time

“It’s been fun to really choose how I’m spending my time. I’ve had days where I’ve woken up and I haven’t had to do anything other than what I want to do, and that’s been so fun. And something I’ve lost touch with over the years. To get to feel like time is mine is a really new thing for me.”

The Need to Read

“As a teenager, I felt like if you liked to read, you were a nerd, and if you cared about shoes, you were a girly girl, so I wanted to create a place where you could do both and be both. We’re living in a time where you can’t opt out of being smart. You have to pay attention. You have to read. You have to nourish your brain every way you can.”