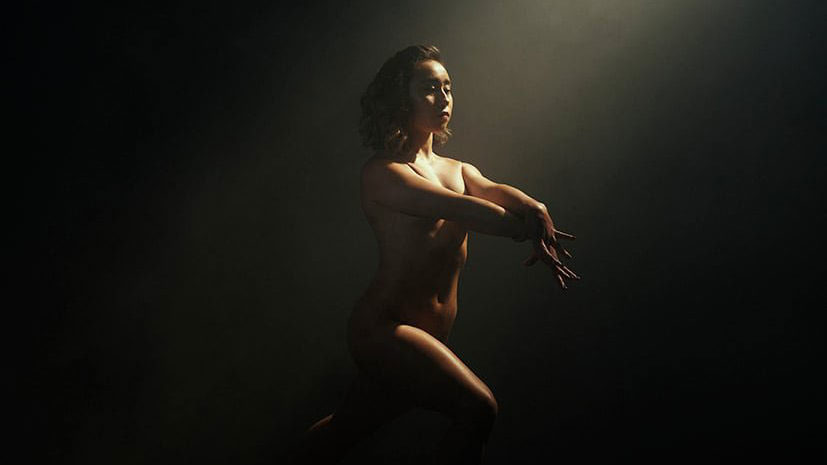 If you don’t know who Katelyn Ohashi is, she’s the cute UCLA gymnast who went viral after busting some well-timed, very current moves while doing her floor routine. She’s more than just that. Her credentials include  a six-time All-American and was a four-time member of USA Gymnastics’ Junior National Team, the 2011 junior national champion and the winner of the 2013 American Cup.

In the new issue of ESPN’s Body Issue, Katelyn goes nude to not only tell her story in her sport and how her body comes along for the ride. I’ve taken some quotes from her interview, but you should also read the full interview at ESPN.

“I became an elite gymnast when I was 12 years old, and everything became less about me and what I wanted and more for everyone around me. The Olympics was the ultimate goal, but it was never my goal. It was put in front of me because of my talent, and my coaches kept pushing me toward it. I felt like I couldn’t give up because my family had made so many sacrifices. I became miserable. My voice was so suppressed. I still loved the sport, but the joy was diminished. I believed the medals were worth so much more than I was.”

Being self conscious about weight

“When I was 14, I started hearing comments about my weight: ‘You look like you swallowed an elephant.’ ‘You look like a pig.’ ‘Your face is three times the size it was this morning.’ ‘You remind me of a bird that’s too big to fly.’ People whose opinions I valued said this to me. My friends and I would try to eat 500 calories or less when we were training seven hours a day. At parties, we would go to the bathroom and try to vomit up the food.”

Her relationship with food

“We were never really educated on what to eat or why it’s important to eat a certain way. We were just told, ‘Don’t eat this’ and ‘Don’t eat dinner.’ I had a horrible relationship with food and didn’t really understand why I was supposed to hate it, but I loved it so much at the same time. It was so normalized because all the girls around me, my close friends, were doing the same thing. I didn’t have open communication with a lot of people. My mom would hide food for my brother that she didn’t want me to get into.”

How injury changed her identity

“Gymnastics defined me. That’s all I did. I was homeschooled, I was pushed to win. Every gold medal, every international competition I won — that gave me my worth. But then I got injured. I was 16 years old, right before my first senior competition, the American Cup in 2013, and my back started bothering me. It got worse and worse. It was like a vertebra was sticking out. By the time I got home — after winning the competition — I was in tears. My mom asked, ‘Aren’t you happy?’ I was like, ‘No, I’m broken.’ Mentally, physically, emotionally. My vertebrae were hitting each other and shifting. They told me I might never do gymnastics again. When I was coming back, about a year later, I tore my shoulder, so I had to get surgery for that as well. It was a full two years before I could step back onto the competition floor.”

Finding passion outside of gymnastics

“I finally found my passions outside of the sport. In elite, your full attention has to be on gymnastics. But in college, Miss Val really allowed us to express ourselves uniquely and find what drives us. She would take me to lunch and make a conscious decision to not talk about gymnastics. We’d talk about school, boys, whatever. And then if I brought up gymnastics, that was the only time it was acceptable to talk about it. We had nutritionists and trainers who worked with us on our bodies, which helped me realize why it’s so important to fuel it correctly. It created a better environment for me to accept my body and not be super weird about eating. I don’t prevent myself from eating anything. Once you release your mind, your body can relax and do what it’s supposed to do.”

“I have a skin condition called granuloma annulare. It covers my entire body. Some look like bruises; some are complete circles. It actually doesn’t affect me, but people are like, ‘What’s wrong with your stomach?’ I used to feel ashamed. I didn’t like posting pictures in my swimsuit or showing my stomach. But now I feel like it’s important to show it because so many people try to hide it. Recently someone said, ‘I was able to take the bandage off my hand to show my granuloma because you inspired me.’ That was such an amazing thing to hear. Why should we have to hide?”

“When my routine went viral in January, what stood out to people was that it was so joyful. People are so used to watching Olympic gymnastics, when you see more of the robotic, stiff gymnastics that is taken very, very seriously. But Miss Val comes from a dance background, and she teaches us how to perform and fully express ourselves. I think the routine went viral because it was so relatable and people could feel joy watching it. A crazy amount of people reached out. Athletes, but also Sen. Kamala Harris, Rep. Alexandria Ocasio-Cortez, Gabrielle Union. Janet Jackson herself tweeted it. I never, ever could have imagined that. For the past two years, we’ve only heard negative things about gymnastics and how it’s abusive. But the sport isn’t abusive. It was the culture. That video put gymnastics in a different light, and people have been able to see the beautiful side of the sport.”